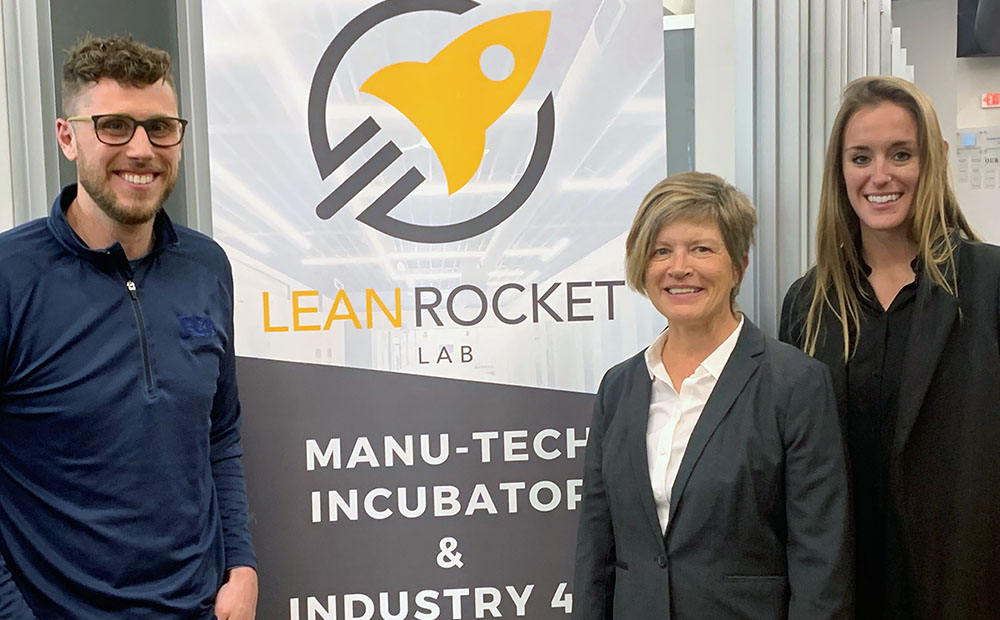 American 1 Credit Union and Lean Rocket Lab, a co-working space and business accelerator founded in downtown Jackson in 2018, have embarked on a $5 million loan program to fund small businesses. The program is called Lean Rocket Local and will run for five years.

The program grew out of a conversation Rocket Lab's co-founders, Ken Seneff and CEO Brandon Marken, had with Martha Fuerstenau, president and CEO of American 1, about how the credit union could help Jackson business owners. The Local program is patterned after Lean Rocket's other programs in support of tech startups.

"When Ken asked us if we'd consider funding a loan program for small businesses, I said, 'No, we're not in that space.' But I realized, these will be sole proprietors and family businesses, and it would make sense for us to get into that space," Fuerstenau said. "I took it to my board in November and got approval. This furthers the mission of American 1."

She said that loan recipients will be entrepreneurs who wouldn't qualify for traditional bank funding, but that the coaching and mentorship they will get from Lean Rocket will make them good credit risks.

"The $5 million commitment over five years is not intended for $1 million per year. It's probably unrealistic to think we would lend $1 million in the first year," Fuerstenau said. "However, we do feel this program will scale in a way over the next five years that $5 million is an achievable number. We have not set parameters around loan size."

Christie Myers, the director of the Local program, said there were 60 applicants by the April 8 deadline. That was winnowed down to the best 25, with those going in to Lean Rocket and pitching for 5 minutes each to an advisory committee, which in turn selected the 11 finalists.

Later this month, those 11 companies will begin a six-week boot camp and be paired with a mentor.

Milestones will be set for each company, and as they hit them, they will get monetary rewards that can total $2,500 each. That money comes from the Milford-based Walters Family Foundation, which is funding the Local program with a grant of $100,000 over the next two years.

Myers said that at a date yet to be determined, in September or October, the 11 companies will then pitch the credit union for loans to fund growth.

Lean Rocket rents shared work space for as little as $99 a month. It has private offices that ring the perimeter of the office and surrounds the shared space, but those are all rented.

One thing that sets Rocket Lab apart is that some of those renters are not early-stage companies in need of a place to work but established companies offering services and support to Rocket Lab clients, including the Endurance Law Group PLC; the Voyager Film Co., which helps companies tell their stories through video; and Mevo Creative Studios, a web design firm.

Both of those were part of a seed funding round of $2 million.

In 2018, David Yanez, a native of Mexico, founded Andonix to help manufacturers replace paper-based work instructions and training with a fully digital system available to employees through tablets and smartphones.

It was spun out from another Detroit company, PTI Quality Containment Solutions LLC, a supply-chain management company for the auto industry. Yanez, the CEO at Andonix, remains as CEO at PTI. Andonix is a DBA for the formal legal name of TriPi Connected Tech Inc.

Yanez said he expects to raise a Series A funding round of $5 million by the end of this year and have revenue this year of $2 million. He said customers include Krispy Kreme Doughnut Corp. of Charlotte, N.C.; the Netherlands-based Phillips Lighting and Censys Technologies Corp., a drone manufacturer in Daytona Beach, Fla.

Soon after launching Andonix, he was introduced to Seneff and Marken at Lean Rocket.

"They were fantastic partners. They helped us craft our value proposition and our go-to-market strategy and introduced us to investors," Yanez said.

By September 2019, Andonix had attracted enough industry attention that it was showcased at a program at the Harvard Business School in Cambridge, Mass., highlighting how innovation and entrepreneurship can improve lean manufacturing practices.

Lean Rocket nominated Andonix for its small-business award and introduced Yanez to Ann Arbor Spark, which in turn helped him find interns from  Michigan State University  and the University of Michigan.

Adam Motley's company is more typical of a Lean Rocket client than Andonix. It is still pre-revenue and hasn't had any Harvard case studies or big investments from state angel investors, although it hopes to raise $500,000 in seed funding within a year.

Motley is the founder of Unchair LLC, which has designed a prototype chair that Motley says is more comfortable and ergonomically sound than existing office chairs and promotes what he describes as "great posture by default," with the help of ergonomists, physical therapists and chiropractors. His chair is narrow at the top, which he says allows a person's shoulders to naturally relax.

"I got tired of back pain from sitting in bad office chairs," said Motley, who still has his day job as a manager in the M&A practice of  Deloitte  Consulting and said he has had years of experience sitting in uncomfortable conference room chairs.

He founded the company, which does business as MOVO, in 2017 and joined Lean Rocket's Manu-Tech Virtual Incubator program in 2019. He has a partner and no employees, yet. The business is run out of his home in Ypsilanti.

MOVO, Motley said, "is a name meant to evoke the idea of movement, capitalized for aesthetic reasons."

He said Lean Rocket helped him with branding and introduced him to a patent attorney. A patent was applied for in February 2020 and granted this past February.

"My goodness, they've been tremendous," Motley said of Lean Rocket. "We got advice and coaching. They helped introduce me with others in the entrepreneurial ecosystem and engineers who helped us with the prototype. Lean Rocket Lab's incubator has been a valuable thought partner in laying out our key priorities and hack our way around roadblocks.

"We would not be where we are today without the Lean Rocket Lab team."