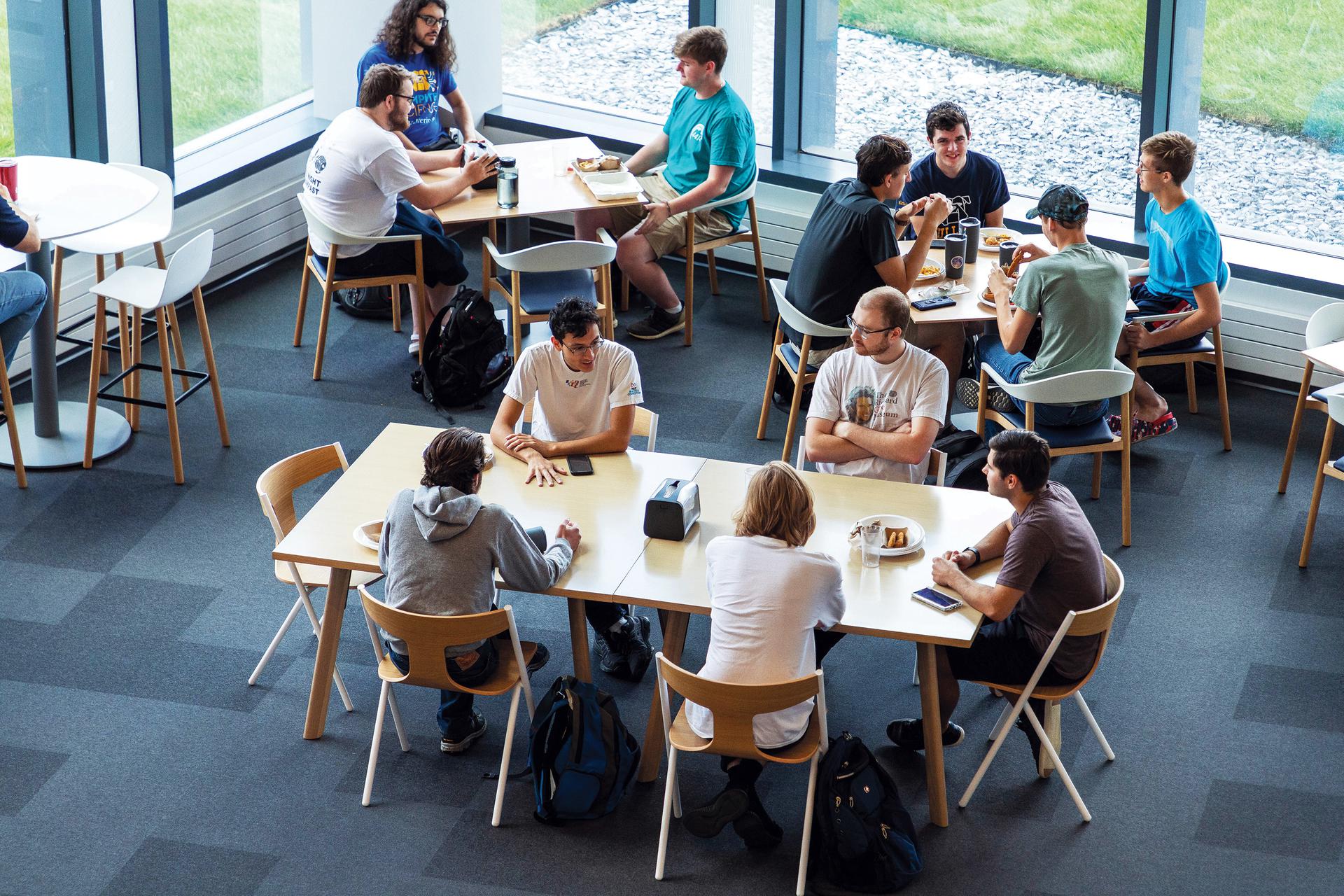 Students gather in the Learning Commons building at Kettering  University in Flint.

Flint-based Kettering University’s new $63 million, 105,000-square-foot Learning Commons building has no classrooms or offices. Instead, the facility is based on collaborative workspaces by Stanford’s Hasso Plattner Institute of Design.

Kettering President Robert McMahan said learning is about far more than what a teacher presents in a classroom.

“This is a commons in the old sense — the village commons — which could be used by anyone in the community. Students will be more collaborative here. They will work in teams more,” he said.

The nationally renowned engineering school’s new facility was funded by gifts, including a $25 million grant from the Charles Stewart Mott Foundation, and designed by Travis Sage, the Michigan design leader for Edmonton, Alberta-based Stantec Architecture Inc.

The building is open and airy. There are glass-enclosed conference rooms with large flat-screen TVs, individual pods for students not in the mood for collaboration, an outdoor terrace with hammocks and even a fully equipped apartment on the top floor for visiting scholars and VIPs.

Each space is first-come, first-served, McMahan said. Faculty do not receive priority over students.There are soda fountains where students can get free refreshments and a coffee shop. A pizza parlor keeps its wood-fired oven going until 2 a.m.  Still under construction is a 20,000-square-foot maker-space where students can use 3D printers and a host of other tools.

“It’s incredible what Bob is doing,” said Tim Herman, CEO of the Flint & Genesee Group, a chamber of commerce.

Other facts and figures:

Beyond its campusKettering has made a significant impact throughout Flint. For example:

Atwood Stadium: An iconic Flint landmark for decades, the 11,000-seat Atwood Stadium is located on the north shore of the Flint River. It was named after Edwin W. Atwood, who was elected mayor of Flint in 1920. 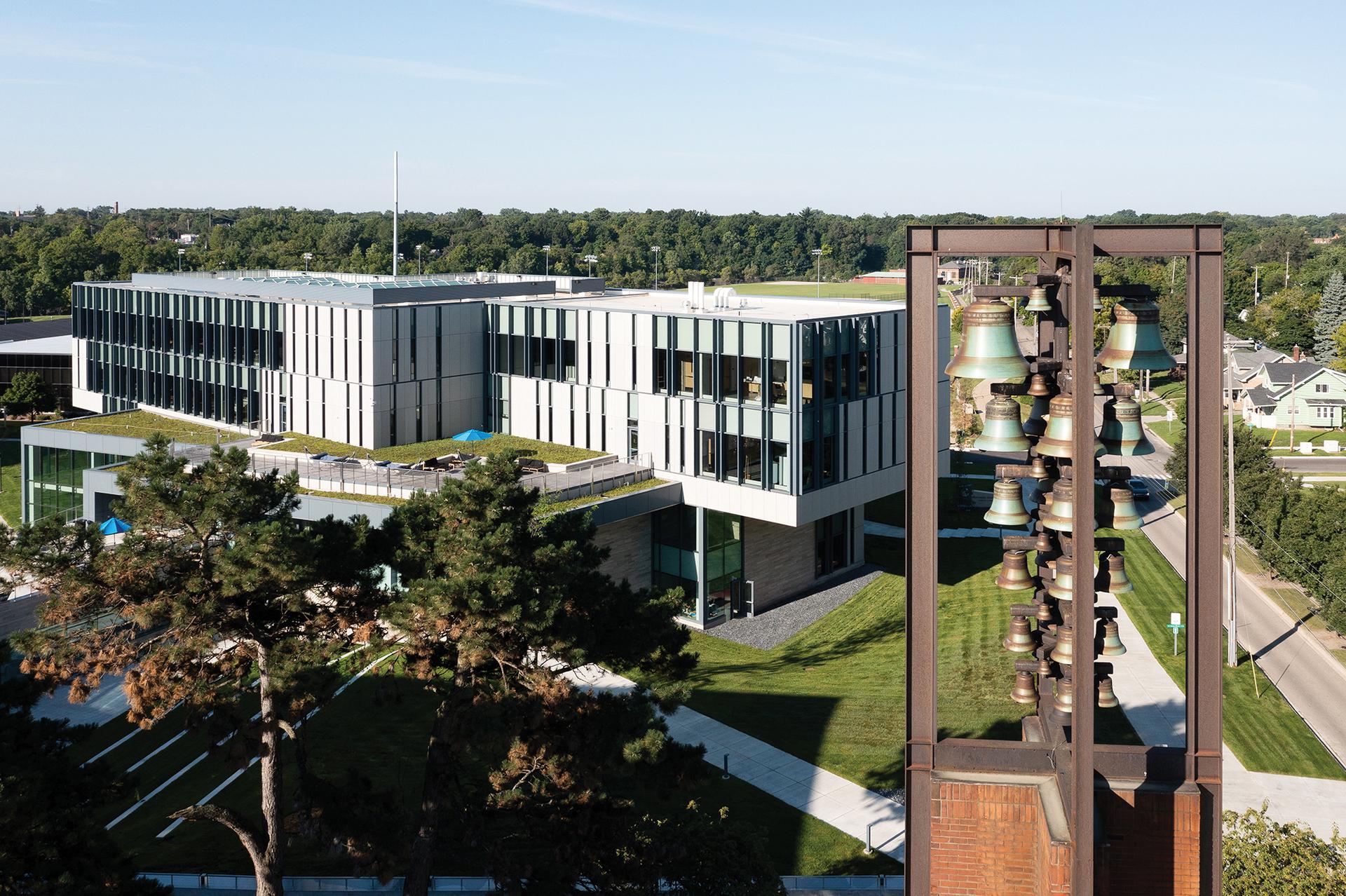 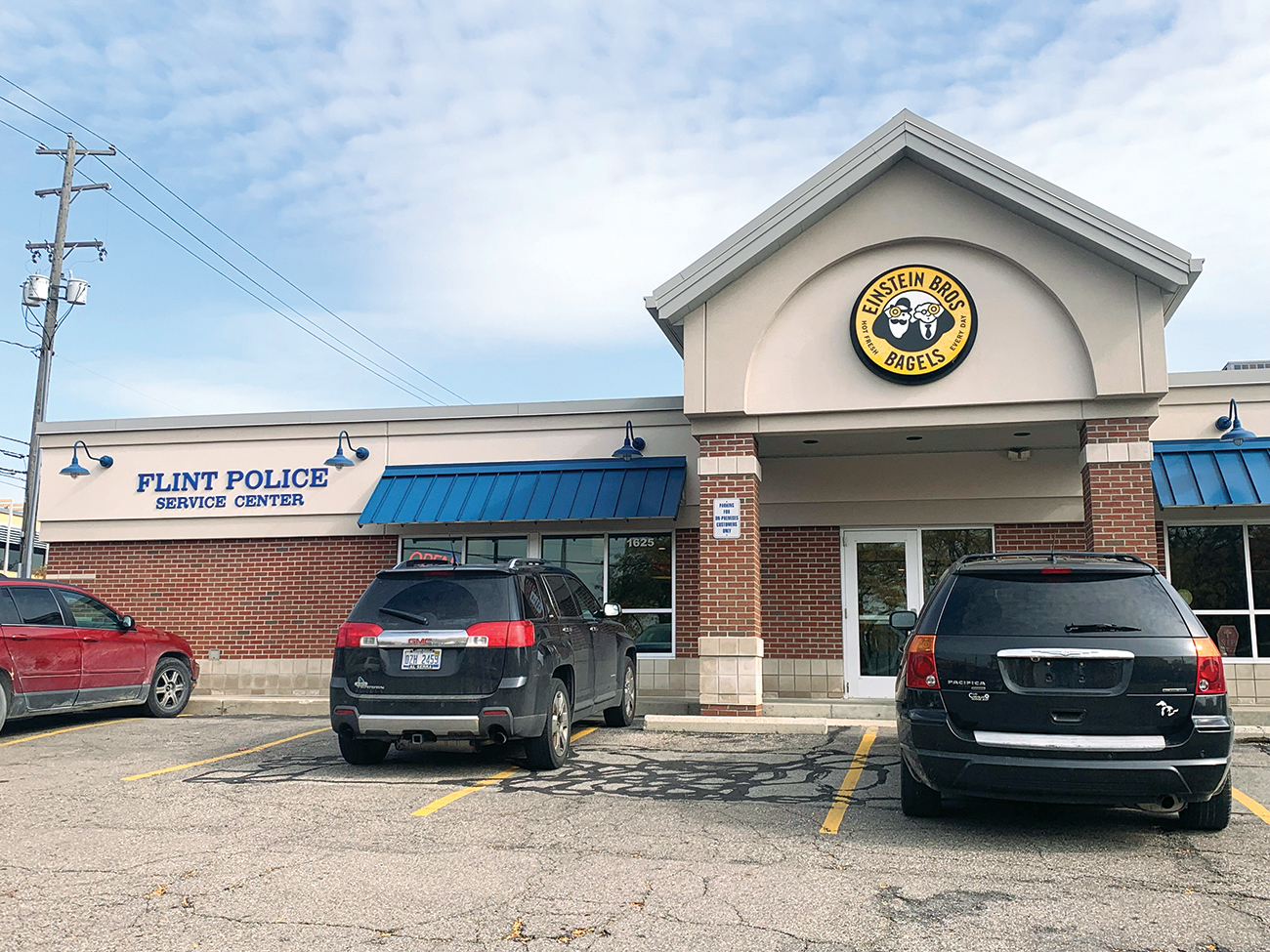 Kettering redeveloped a party store at the edge of campus into a Flint police station on one side and a university-owned Einstein bagels on the other.

Atwood seemed ready for the wrecker’s ball in 2013. However, McMahan made a pitch convincing Mike Brown, Flint’s emergency manager, to have the city transfer ownership to the university.

Renovations cost $4 million, paid for by gifts from the community — including Kettering, the Mott Foundation and Diplomat Pharmacy, a Flint-based New York Stock Exchange company that entrepreneur and philanthropist Phil Hagerman ran. The 25-foot excavation of the playing field required 5,000 tons of fill. “What was a hole in the middle of the corridor is now a valuable community asset,” said McMahan.

In 2015, the stadium reopened with professional-grade artificial turf and striped for youth and adult football, lacrosse and soccer games. It’s also home to the Flint City Bucks, a development soccer team owned by Dan Duggan, the younger brother of Detroit Mayor Mike Duggan. Kettering’s intramural teams play there. And the Flint Institute of Music hosts an annual Independence Day concert in the stadium during the city’s annual fireworks display.

When McMahan became university president in 2011, however, the Carriage District had one of the highest crime rates in Genesee County. There were dilapidated and burned-out houses long forgotten.

Yet, in 2012, Kettering began buying land and buildings along both sides of the Flint River. 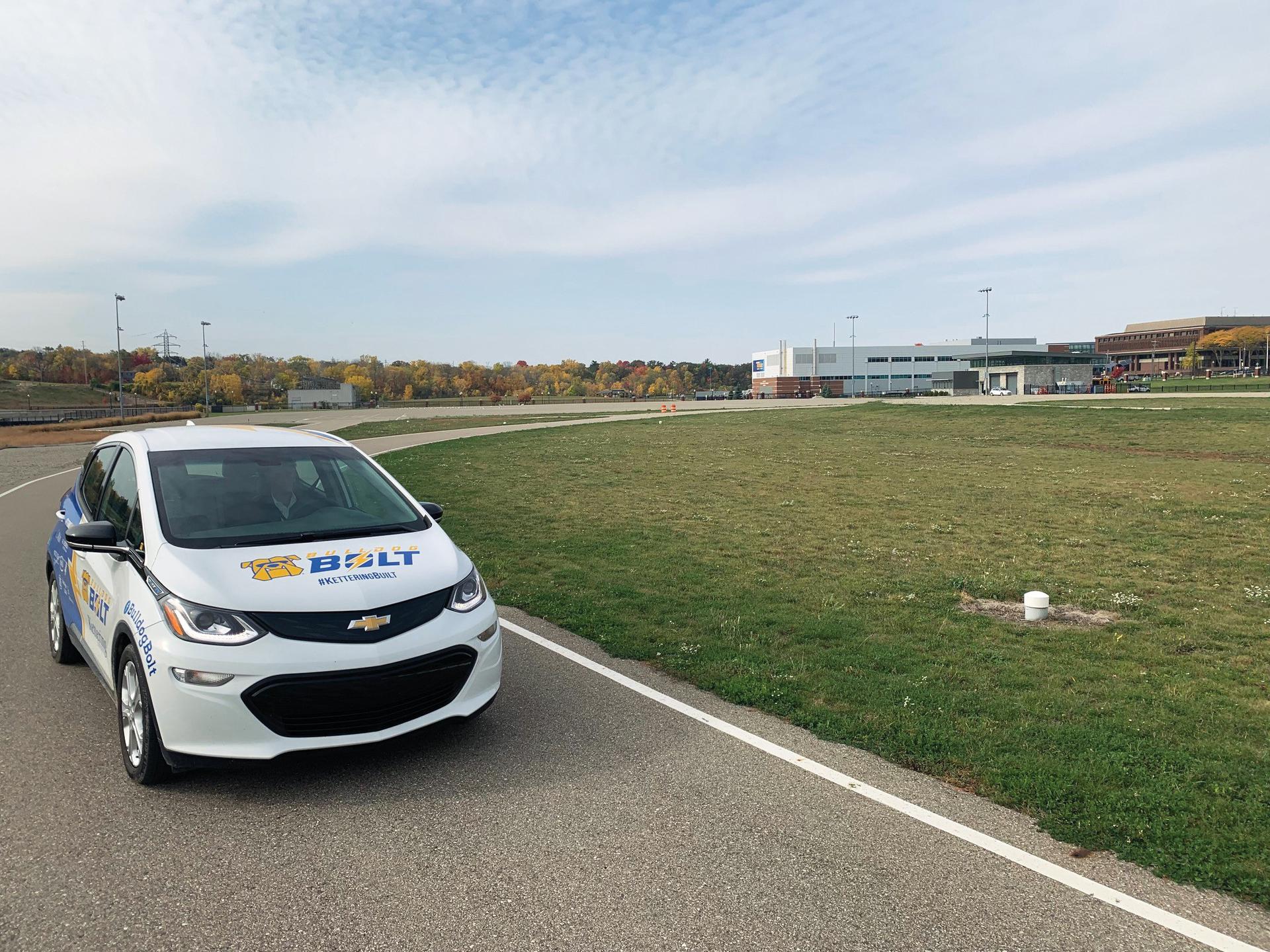 Electric vehicle at the test track at the GM Mobility Research Center at Kettering University in Flint. The 21-acre proving ground and research facility bolsters automakers’ and suppliers’ ability to develop new products.

“Universities like this one can make a big difference, but you have to be very intentional. That typifies our approach here,” McMahan said.

The university acquired about 400 parcels and tore down 300 blighted structures. The school created hundreds of acres of greenfields and cleaned and fenced an ancient Native American burial ground that had been overrun with weeds and garbage. Some rehabbed houses are available for Kettering employees to buy through a program of forgivable loans.

“Bob’s board and his staff have been such great partners as we grow our economy downtown,” said Herman. “It’s really spurred business.”

Kettering redeveloped a party store at the edge of campus into a Flint police station on one side and a university-owned Einstein bagels on the other. Kettering also became landlord to recently built Jimmy John’s and Little Caesar’s restaurants.

Although, McMahan declined to disclose the cost of the purchases, demolitions and rehabs, he said none involved state funding. Kettering received donations, through the creation of the University Avenue Corridor Coalition, from donors such as the Mott Foundation. The federal Department of Justice provided a $2 million grant.

Then, crime dropped sharply. People now stroll, jog or bike along the path installed by the river.

Chevy in the Hole: Perhaps the most historically significant of Kettering University’s projects occurred in 2016 when it opened the GM Mobility Research Center. The 21-acre proving ground and research facility bolsters automakers’ and suppliers’ ability to develop new products, such as electric and autonomous vehicles.

Originally, there was a sawmill and a paper mill on the site. The Flint Wagon Works was built in the 1880s and converted to auto manufacturing in 1904. It employed 14,000 workers at its peak.

Even more monumental is the site’s role in the historic battle between General Motors and autoworkers. On Feb. 1, 1937, workers at the largest plant in the world — nicknamed Chevy in the Hole — joined other General Motors workers in Flint for a sit-down strike that led to the creation of the United Auto Workers.

In 2004, long after the plant closed, the last of its numerous buildings was demolished, leaving a vast brownfield.

The restored land and $7 million mobility center include the Harris Mobility Research Annex and a 3.25-acre test track built with stadium-style lighting. Grand Blanc-based CNXMotion, a joint venture between Nexteer Automotive and Continental Automotive, uses the facility to show its motion-control technologies. Five of its 30 employees are Kettering graduates.

The center is also part of the larger Chevy Commons, a $17.3 million project that includes restored grasslands, meadows, wetlands, woodlands and walking and biking trails along the Flint River.

Flint’s Industrial Fellowship League founded the School of Automobile Trades in 1919 to train technical and management talent for the rapidly growing auto industry.

Today the school, now named Kettering University, is generally acknowledged as one of the leading engineering and STEM-focused universities in the world. According to a 2017 study, Kettering ranked No. 4 in patents granted per alumnus just behind of Cal Tech, the Massachusetts Institute of Technology and Harvey Mudd College of Claremont, Calif., and ahead of Stanford University and Carnegie Mellon. Kettering, which continues to grow, sits on an 85-acre campus a mile west of downtown Flint.

How Kettering got its nameThe school’s first president Maj. Albert Sobey served for 31 years. Sobey received his engineering degree from Michigan Agricultural College (now Michigan State University) in 1909 and earned his rank in Army Intelligence during World War I.

The title stuck when his clothing was misrouted after his discharge and took weeks to arrive in Flint. Frugal, Sobey wore his Army uniform when he started his new job, and students began calling him Major.

GM divested itself of ownership 56 years later, in 1982, and it became the GMI Engineering & Management Institute, a private, nonprofit university that offered master’s programs to students who lived on and off campus.

In 1998, GMI became Kettering University in honor of Charles Kettering. The inventor and auto pioneer held 186 patents, including the spark plug and electric starting motor that replaced hand cranks in automobiles, and was GM’s head of research for 27 years.

Kettering also invented the Freon refrigerant for DuPont Chemical Co., was a Delco founder and invented the first aerial missile for Dayton-Wright Co., the airplane manufacturer he helped found in 1917 after the declaration of war between the U.S. and Germany.

Its 2,300 undergraduate and graduate students generally alternate a semester of classwork with a semester of work in co-op assignments at one of Kettering’s partner companies, which include automotive suppliers and OEMs, hospitals and medical-device manufacturers and a wide range of other businesses worldwide. Most students take on seven to nine co-op semesters throughout their academic careers.

Every senior does a thesis project that involves the university and addressing a problem at their co-op employer organization.

According to the school, students on their co-op assignments make an average of $15.38 an hour their first year, $18.72 an hour their senior year and are hired after graduation at an average salary of $70,000.